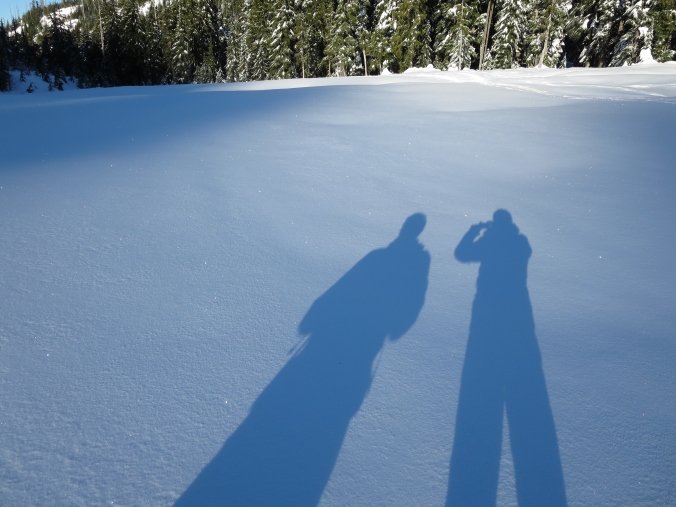 Generally speaking I don’t tend to get too down, a bit flat occasionally and that’s enough to make me feel uncomfortable and a bit despondent about how the world is behaving. I should qualify that and say how the human species is behaving and affecting the world – the latter is just doing its thing.

Above all, getting outside is one of my first choices to alleviate this sense of unbidden  dispiritedness, and I recognize (how could I not?) how very, very lucky I am to be able to do so.

Before the holidays hit, we tramped up to nearby Seymour Mountain where temperatures had started out in the morning at around -11c. I had on two pairs of thermal leggings under waterproof trousers, a thermal top, fleece, jacket, ridiculously massive gloves that I’d normally use skiing, hat, thick socks, sturdy hiking boots etc. I had no intention of getting more cold than I needed to thank you very much.

Snowshoeing is a madly active sport depending on how you approach it and calories burned range from 300 to 500 or so an hour (with some reports of 1000 calories burned per hour but that would be for extreme athletes I think). I’m not interested in the calories, just that working that hard does keep you warm. 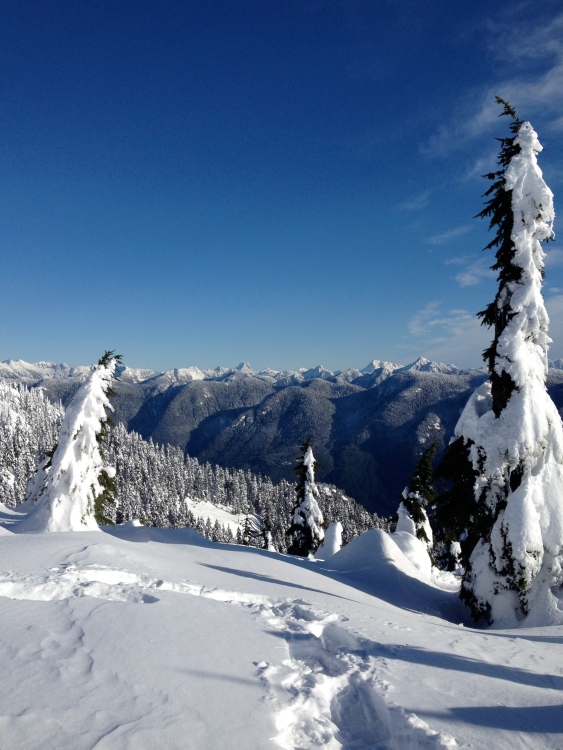 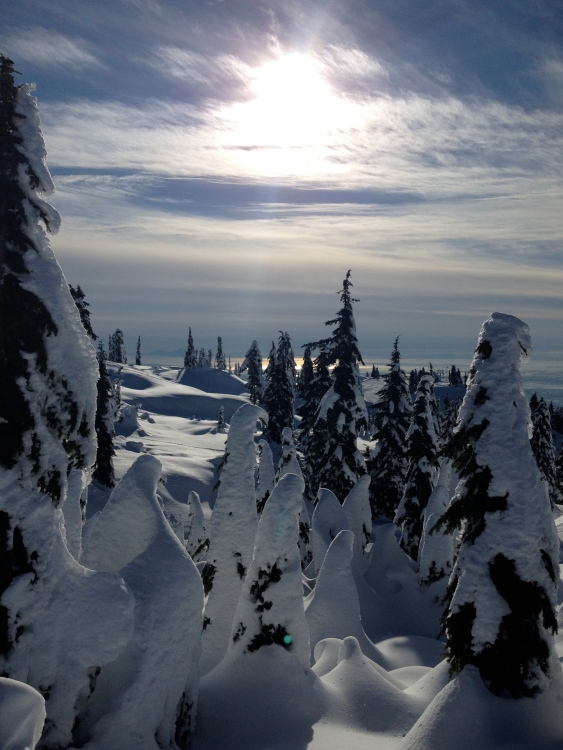 Looking into the sun

Once you’re up the mountain, all I can say is….the light! The blueness of the blue sky! The sharp, crystalline air that you gasp in! That ineffable, pervasive scent of snow! And then you look down and in a moment of stillness notice the intricate, delicate and unbelievable complexity of a single snowflake and how different it might be from that other snowflake (I just read that despite all the different snowflakes they are all six-sided – extraordinary, to me at least since I didn’t know that). Then you’re off again, running or stomping or whooshing through the snow.

We were flattened over the holidays by a fierce flu that, as it did to many, burnt through us like a fire leaving us drained and perpetually tired. We’re recovering now and headed up to another local mountain a couple of days ago to test our lungs. It was cold again, but it was a tad warmer and it showed in snow-free trees. 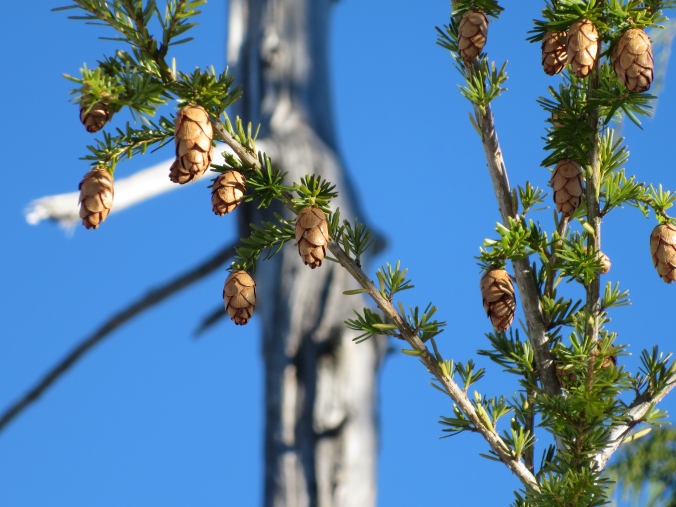 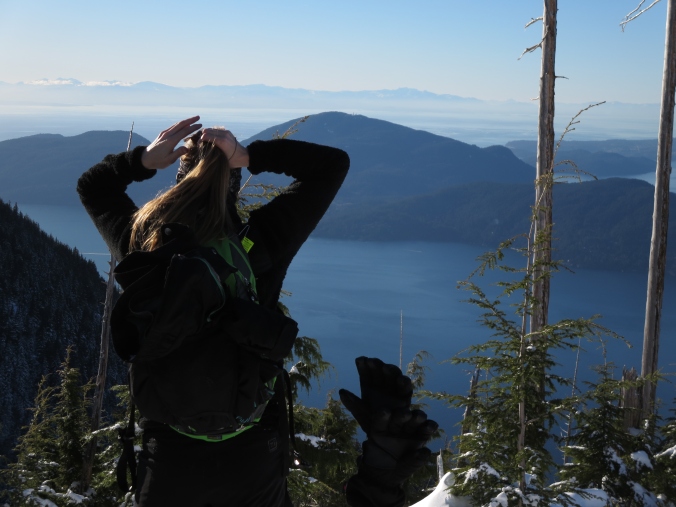 We tramped with some effort through a patch of old growth forest, testing our strength and happy to feel our muscles respond as we expected them too, if a little slower, stopping to admire a stand of old growth that we’ve seen so many times before but are always awed by. 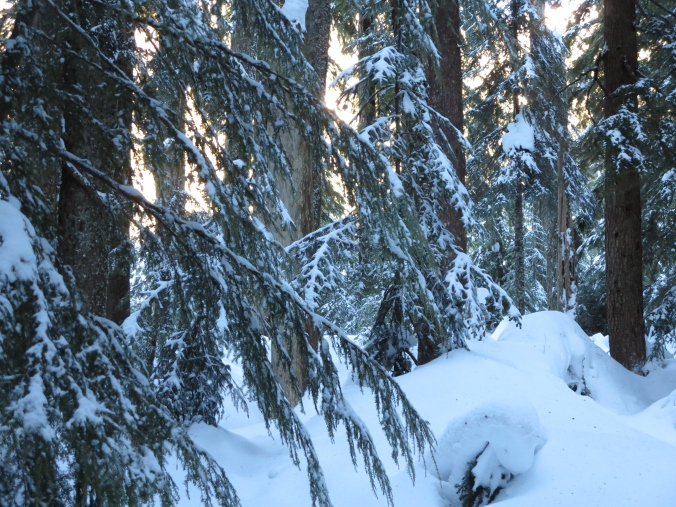 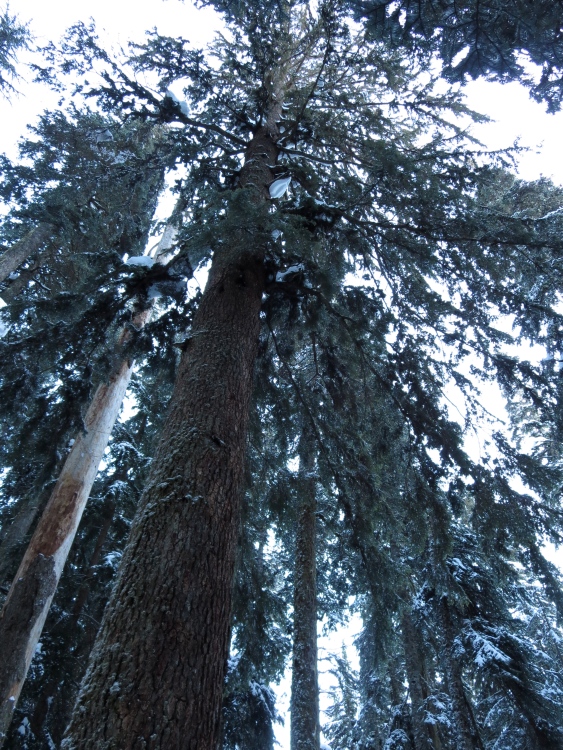 After a couple of hours we headed home, in a state approaching something like relaxed alertness. Dinner that night was home-made pizza accompanied by a glass of wine and it tasted as good as anything I’ve ever eaten and drunk. It’s the small moments stitched together that end up creating a sense of contentment. 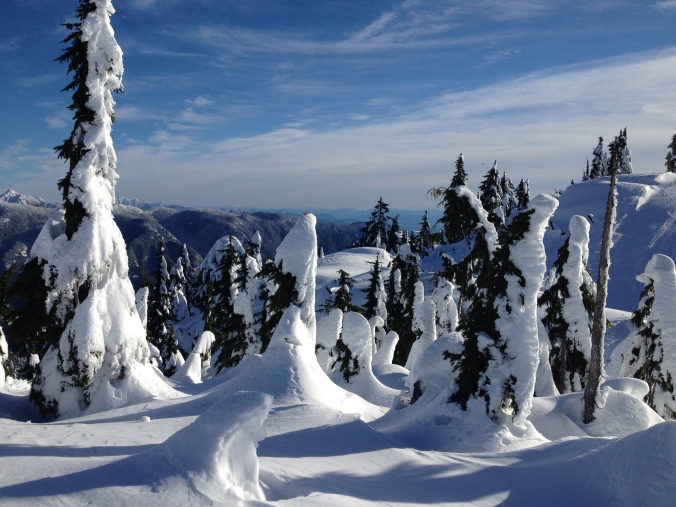