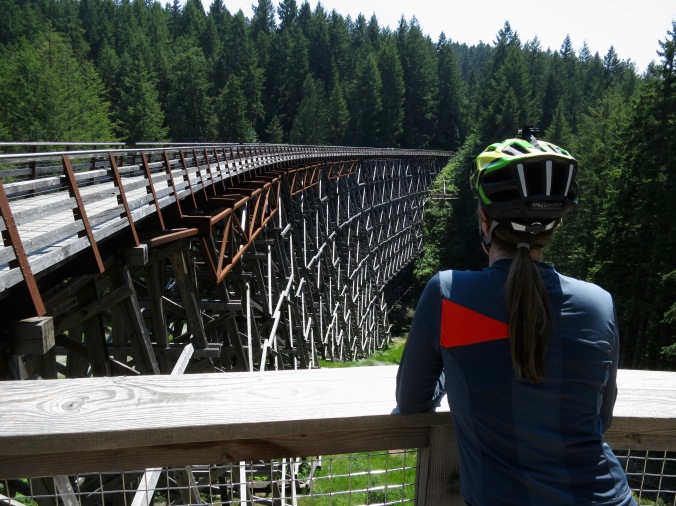 Mid-July rain pattering against the window, I pick up a pencil and apply myself to the latest drawing. Botanical illustration is something I love and pursue in the spare time I can carve out from work. My legs feel restless however and I realize I’m missing the spin and whirr of pedals, the hum and clatter of wheels and the days where we rode for hours, finally stopping for the day and a hearty meal before passing out and getting up to do it all over again. Not having to think much beyond that was a genuine detox from work, screens of various kinds, information overload in general.

We’d promised ourselves a relatively local cycle tour. Door to door, on the bikes with no transportation other than a couple of ferry rides. We chose to ride the Trans Canada Trail on Vancouver Island from Nanaimo to Victoria via Lake Cowichan, then back to Vancouver with a side trip to Saltspring Island, roughly 400kms in a little over a week, including several rest/chilling out days.

I don’t think I’ve ever worked so hard on a bike. A 75km day on mostly gravel trails is probably equivalent to about 100kms day on tarmac. I developed my first ever saddle sore from hours bouncing around on rough, choppy portions of the trail. Apart from a couple of nights booked in an Airbnb, we camped the rest of the time and in taking all that we deemed necessary – tent, sleeping bags, sleeping mats, cooking gear, some basic food, copious snacks, clothing for variable weather conditions – we managed to weigh our bikes down an exorbitant amount. In the end we used everything so I felt justified in our choices, if amazed that I could even steer the unwieldy, bucking piece of metal that my bike had become. 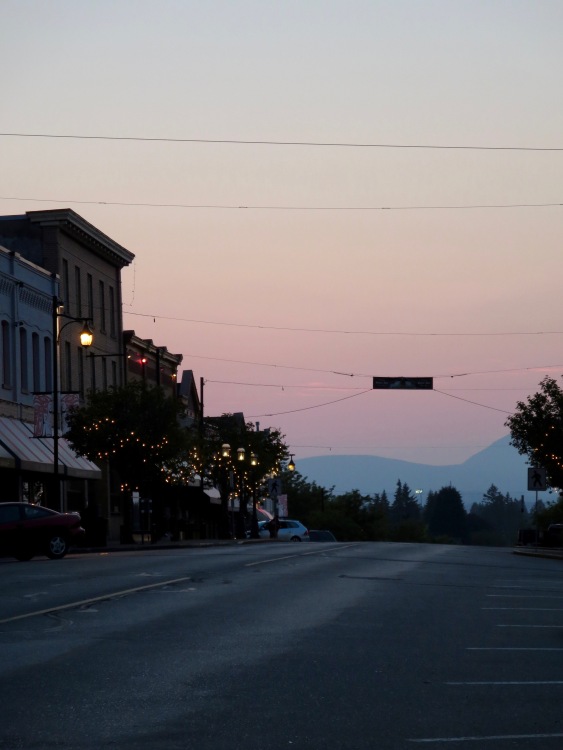 We got lost on the first day on a deserted ridgeline outside of Nanaimo. Abysmal signage – an issue confirmed by other tourists and residents – had led us astray. And hours later, near the end of the day, we found ourselves riding the shoulder on the busy, fast, noisy highway. We finally staggered up a brutally steep hill (a theme that was to recur) to our first overnight stop in Ladysmith as the sun began to sink. I wouldn’t choose to ride from Nanaimo again unless the route was improved, but I’d visit Ladysmith again without hesitation; a delightful small town, unspoilt, quiet, stuffed with rose-filled gardens, a pub devotedly English in style and a bakery packed with locals queueing for pastries, birthday cakes and rustic loaves. 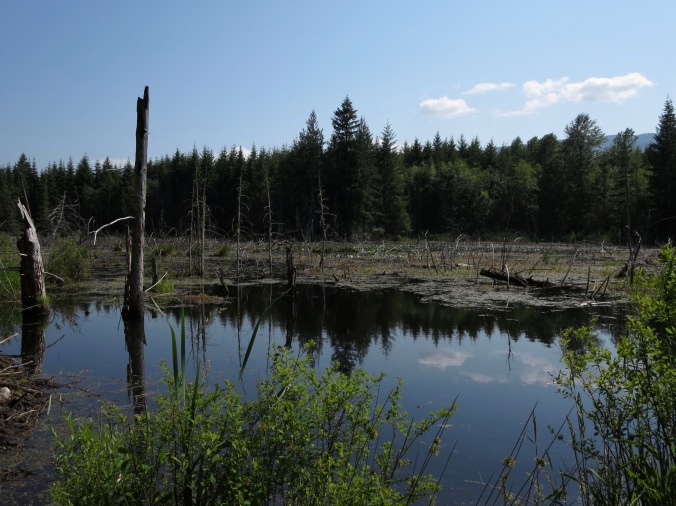 We fared better on the Cowichan Valley portion of the trail. It’s (mostly) well signed, and obvious, albeit with long, sometimes confusing connecting stretches on roads. A gravel trail generally follows former rail lines, a new kind of riding for me on a regular touring bike with smooth tires. A gradual upward gradient toward Lake Cowichan and the resistance of gravel meant slower speeds, hunkering down to hours of doggedly turning the legs, the sound of our heavy breathing accompanied by the percussive clink and ping, rattle and clatter of loose stones bouncing off our wheel rims. The scent of fir, spruce and cedar emanated from dense stands of trees that hemmed us in on each side of the trail, breaking rank only occasionally to reveal meadow, freshwater marsh and hillside. 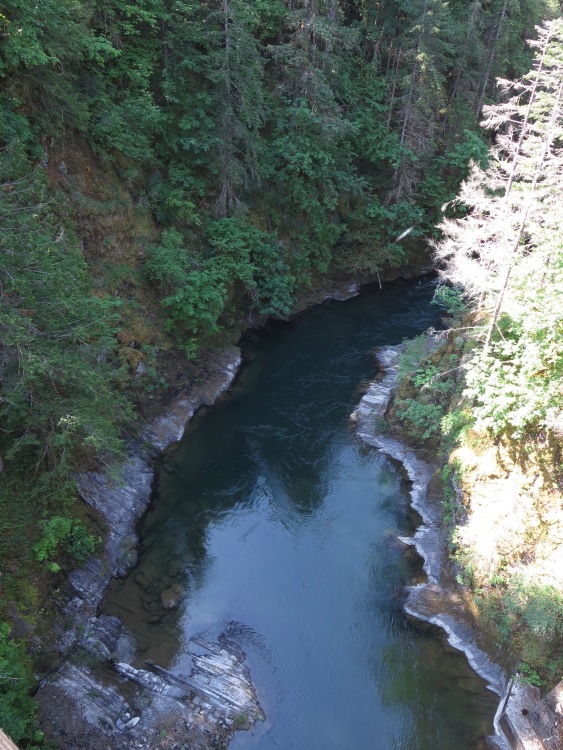 The subtle downhill slope from Lake Cowichan the following day was our reward for the previous days grind up, gravel, rock and stone giving way to smooth earth at times. A spike of adrenaline spurred on our legs when we heard the trail was favoured by the local bear population, and that Lake Cowichan had experienced an increase in human/mountain lion conflicts as logging invaded yet more of their territory. With many kilometres to cover before we reached Goldstream Campground for the night we stopped only to admire the view from the several bridges we crossed –including the spectacular Kinsol Trestle Bridge – spanning deep gorges the oxide green river water flowed through. 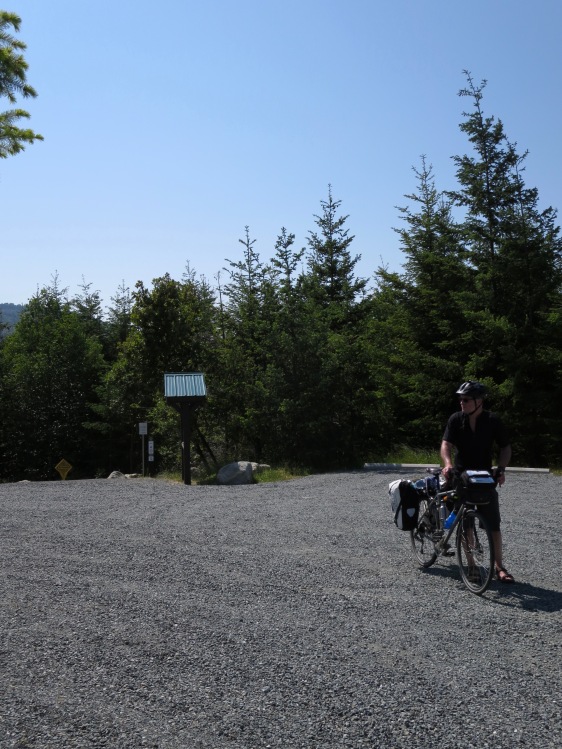 Scott emerges from the Malahat Connector

The joy of moving from one kilometre to another under our own steam, reeling in forest, valleys and mountainsides, couldn’t even be dented by the heinous gradients we encountered at the Malahat Connector in the Malahat Nation or the Sooke Hills Wilderness trail. But as my front wheel skittered sideways on loose shale yet again whilst I pushed my bike up another 20% hill, I wondered why I was doing this to myself. For hours. And hours. Tired, hot, as I planted one foot in front of the other, the answer wasn’t completely available to me then of course. It’s always only later that I fully appreciate the experience.

In the simplest terms, it’s because I’ve been on an adventure, and my legs are ready for another.

Author on the Cowichan Valley Trail, part of the Trans Canada Trail network

6 thoughts on “The Trans Canada Trail: testing my mettle.”