I don’t normally publish another post so quickly, my average seems to be about every two to four weeks, but, I do have to share a fantastic juice recipe. I sort of collated it from several different sources and then adjusted it a bit to make it my own (no sugar added, and an extra lime). 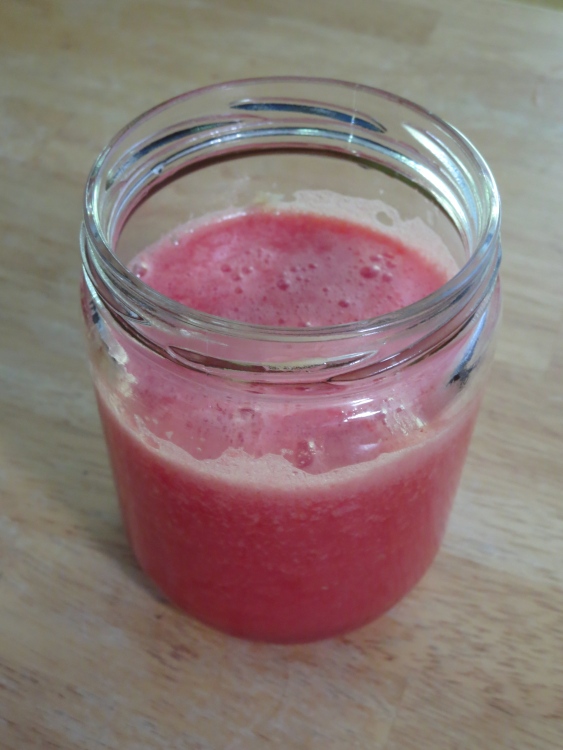 It is completely delicious. I used a jar that originally had ice cream in it to drink from. I hadn’t yet done the washing-up and we’re majorly down on glasses because I am, how can I say, quite clumsy. I break things, or burn things, or spill things onto things, quite a lot. I know, it’s not good, I’m working on it.

For the juice I used as much chopped watermelon as I felt like, in this case about a third of a mini watermelon and the juice of two fresh squeezed limes. That’s it. Nothing else. I try to use organic watermelons and limes if I can. Watermelon has of course tons of water in it (!) but apparently also good amounts of vitamins A and C, magnesium, potassium, antioxidants and amino acids, it appears pretty much the same could be said of limes. I threw the watermelon and lime juice in a blender, and that was it. Refreshing and very, very good.

The holidays are around the corner, hard to believe really, but we finally have our living tree up and decorated (part of our sneaky plan to create a forest in the city, we’ve already planted trees from the last two years). Every day I check the postbox with an anticipatory thrill that there will be another Christmas card waiting to be read. In these days of junk mail and bills, transitory emails and texts, it’s wonderful to read a handwritten message from friends and family, from near and far. * * * With that in mind, if you need some last minute festive botanical cards to attach to presents or pop in the post, head to the very wonderful @thepostcardplace where my illustrations of holly and rose hips are stocked. And you’ll find many other designs by local artists at this wonderful store. . . . . . . #artistsoninstagram #carandache #fabercastell #coloredpencildrawing #coloredpencilmagazine #coloredpencil_art #botanicalillustration #botanicalartist #illustrationnow #naturedrawing #botanicalart #rosehipdrawing #hollydrawing #botanicalartlovers #artshare #postcards #keepwritingpostcards #snailmailrevolution #snailmailrevival #sendmoremail #writingpostcards
A slice of Wedge Mountain, and a dusting of hoar frost. We spent a day in Whistler last week and explored the first few feet of the steep trail in Garibaldi Provincial Park. I had no idea there was a hiking route up this gnarly mountain. A must for next summer! . . . . . . #whistler #wedgemountain #camping #campinglife #garibaldiprovincialpark #explorecanada🍁 #wanderlust #canada #leavenotrace #theoutbound #westcoastofcanada #westcoastcanada #getoutside
The bright colour of rose hips endures through winter, and the fruit provides nutritious food for birds and animals during the lean, chilly months. I’ll be using this illustration to make greeting cards and postcards as soon as I’ve completed it, which will be very shortly! . . . . . #botanicalillustration #botanicalartist #botanicalartists #illustrationnow #naturedrawing #coloredpencildrawing #botanicalart #rosehipdrawing #fabercastell #polychromos #artshare #botanicalartlovers #drawing #rosehips
Hello old friend.....so still a bit hobbled by a slightly dodgy back, but finally on the road bike at least, mountain bike soon to follow with luck, so long as I don’t overdo it. . . . . . . #roadbiking #backonthebike #getoutside #explorecanada🍁 #wanderlust #theoutbound #livebravely #leavenotrace #canada #lifeisbetteroutside
Sketching on my trip to Wales. I took a selection of pencils and hoped for the best. On one of many woodland walks I brought back some fallen pine needles and cone. The luxury of a walk followed by some late afternoon sketching, joyful. . . . . . #pineneedles #wales #botanicalillustration #naturedrawing #coloredpencildrawing #botanicalart #botanicalartist #fabercastell #polychromos #luminancepencils #artshare #botanicalartlovers #drawing #sketching
Sometimes you just gotta get away.... Just returned from a (too) short visit home to the UK, with a side trip to lovely Wales, and a stay in the very special Italianate village of Portmeirion in North Wales. Overlooking an estuary and situated on the edge of Snowdonia National Park, the only sounds at night you hear are the ‘peeps’ of the many robins still busy after dark, the rustle of autumn leaves in the wind and the ebb and flow of tidal water in the estuary. Time with family and time-out from work, with daily walks in the woodlands, rain or shine. So very needed. . . . . . #portmeirion #wales #nature #snowdonia #visitwales #countryside #neverstopexploring #getoutside #thisiscymru 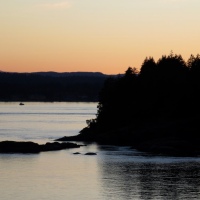 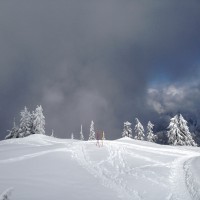 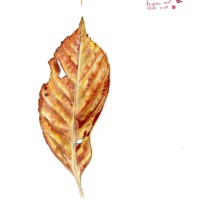