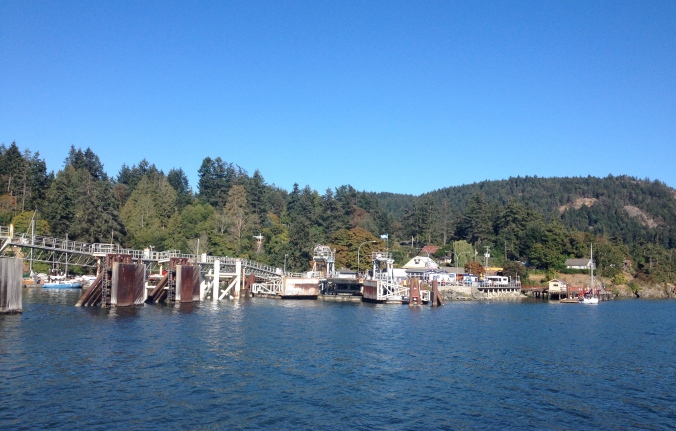 We were itching to do some cycling touring, to stretch out our legs and be entirely (or mostly, ferries notwithstanding) self-sufficient. To that end we decided to ride back to a favourite southern gulf island in BC, Salt Spring, and combine it with a visit to our friend in Victoria on Vancouver Island. It was wonderful, around 130kms of moderate riding over the course of four days ( a perfect amount in hot weather and for a more relaxed break) incorporating a gorgeous island, some farm stands to munch local fruits and veggies from, scenic roads to ride, fresh water lakes to swim in, some freezing ocean to dip in, and a leafy city to wander around near the end of the trip.

We did our special of stealth parking in the quiet back streets of Tswwassen itself and belted up the causeway (about 7kms on a bike route) to the ferry terminal and rolled onto one of the frequent ferries that makes its way across the Georgia Strait to Swartz Bay. I love being the first on and first off the ferry and the fact that you’re saving about $160 when you don’t take a car (insanity! When did it become so expensive to travel by ferry to nearby islands, and on the same note, when did BC Parks get so expensive? Salt Spring is still bearable at $20 a night for a tent site, with no showers, but most now seem to be up to $30 or more, and don’t get me started on the private campgrounds. No wonder more people want to wild camp where they can, it’s something we might have to look into. End of Rant). Once at Swartz, we rolled our bikes over to the connecting ferry for Salt Spring, which deposits you roughly twenty-five minutes later at Fulford Harbour on the island. In the summer you can take a direct ferry to Salt Spring or a meandering one which stops in at Galiano, Mayne and Pender Islands en route and takes about 3 hours. Both latter choices dock at Long Harbour, the main ferry terminal at the other end of the island to Fulford. It takes us about two hours to ride from Long Harbour to reach the campground we stay at on the island. If you want a longer ride it’s a great route. 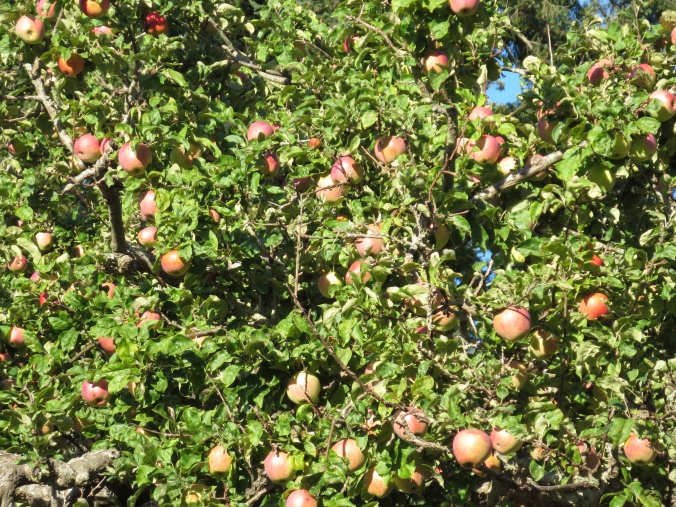 If you ever do this trip I recommend that you immediately head to the Salt Spring Mercantile Store in Fulford village which is about a minutes walk from the harbour entrance (Fulford is tiny) and pick up several of the house-made Giant Cookies. They. Are. Amazing. We bought nine of them over three days. A bit cheekily I asked if the recipe might be available. It’s not, naturally, but they were so reasonably priced I would’ve happily bought dozens more. At the Mercantile, one of those lovely and increasingly rare local grocery stores that stocks a bit of everything, you can buy the basics like milk and bread, coffee and more exotic fare like in-house spanakopitas, gluten-free quiches and, of course, cookies. It’s then about a 9 or 10km ride to Ruckle Provincial Park. It doesn’t sound much, and it isn’t but……there is no straight bit of road. It’s all hills and corners, which is why it’s so special really. The first hill out of Fulford is a bit brutal, there’s no getting around it. We felt every pedal turn as we pushed up the first steep corner out of the village with our panniers laden with tent, sleeping bag, food, tent pads etc. (Why is it that when you pack you need as much for three or four days as you do for ten or fourteen? It’s a mystery I’ve never been able to solve. It’s probably because we take a lot of food.) A car passed me as I toiled up the steep corner and a woman yelled out the car ‘you got it!’. I nearly rode into the ditch in surprise but it made me laugh. After that it’s rolling hill after rolling hill as you pass farms stands, a couple of lakes, pastures and orchards. It’s pretty idyllic, as is Ruckle Park. The park was first homesteaded in 1872 by Irish immigrant Henry Ruckle and his descendants have farmed the property since. The Ruckle family donated their land to BC Parks in 1972 but still operate an ‘active farm’ area of the park. Sheep wander around spacious fields whilst turkeys stalk freely across the road you ride in on. 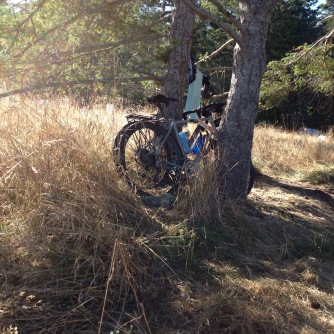 bikes hiding from the sun 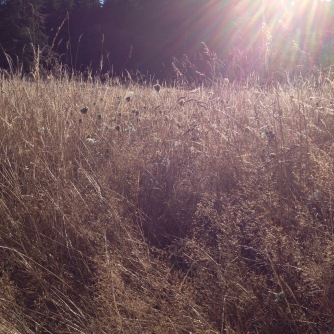 I love the campground, you’ll have to forgive me for waxing poetic about it once again in this post. Some tent sites are tucked away in the woods, others occupy spots close to the shore, all have plenty of space. It was as peaceful as ever. I caught the tail end of the Perseid meteor shower one evening as several fireballs streaked through the sky, one leaving a distinct vapour trail. Another night two owls flew across the campground, landed in a nearby tree and hooted away for a while before taking off again. I realized it’s been years since I’ve heard owls. Deer, rabbits, raccoons (pack away your food!) and apparently mink (I’ve yet to see one) abound. We read books, wandered around the shoreline and rode back along the road to one of the lakes for a swim in significantly warmer water than the ocean. 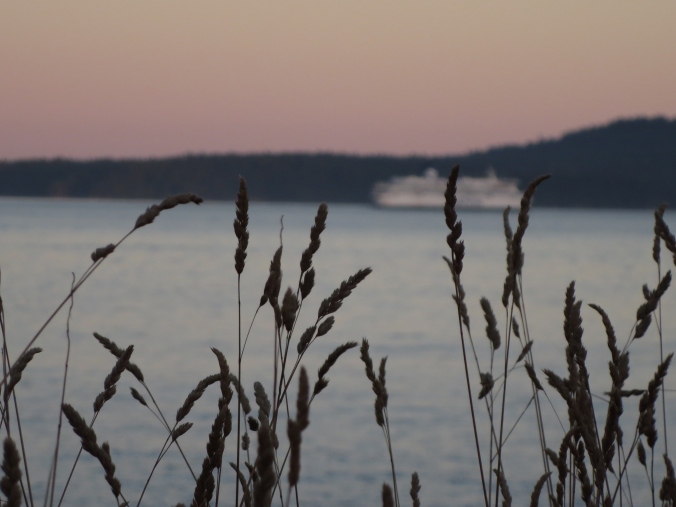 evening in the campground

Considerably lighter after we’d eaten most of our food, we headed back to the ferry for the Victoria leg of the trip. Sixty or so kilometers round trip on the Lochside Trail after a convivial evening in the city spent wandering around tree-lined streets whilst we talked and caught up on life with our friend. Not a bad way to spend three days.